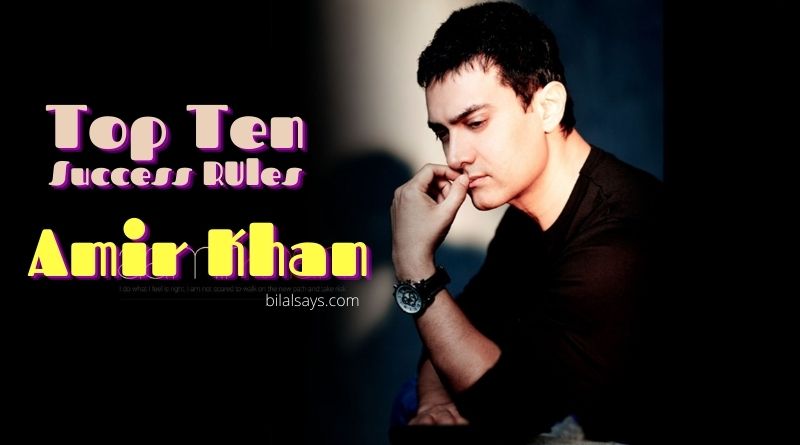 He is one of the most creative film maker, actor, tv host, director & civil right activist; who is literally a face of his own type of modern Hindi Cinema. He is in entertainment business for more than 3 decades with no fall down. He is known for his choosy behavior, creative executions and selective characters. He is the most influential personality of Bollywood, India. His movies are the best examples of impactful meaningful cinema. He is the torch bearer of purposeful cinema. Informally, he is known as Tom Hanks of Bollywood. He was awarded with Indian 3rd & 4th most respectful civilian awards which is Padma Bhushan & Padma Shiri, in 2010 & 2003 respectively.

Contents hide
1 Amir Khan Biography & Short Career Summary:
2 Don’t Chase Success & Value Failures
3 Be Passionate & Keen
4 Be The Change You Want To See
5 Enjoy What You Are Doing
6 Live On Your Own Terms
7 Follow Your Heart
8 Help Others
9 Live Healthy, Sleep Well
10 Believe On Your Instincts
11 Work Hard

He was born in Mumbai, India on 1965, in a family which is already in entertainment industry. He started his acting in documentaries directed by the students of FT-II Pune. He had five film releases in 1990. He is known for versatile roles ranging from romantic to action, from character actor to comedy. We can divide his career in 2 phases; one before Lagaan and other is after Lagaan. Before Lagaan, his major credits were mainly focused on commercial cinema with the likes of Qayamat se Qayamat Tak, Andaz Apna Apna, Ishq, Ghulam, Raja Hindustani etc. In 2001, he appeared in Lagaan (Waging), which was a major critical and commercial success, for both his acting and for his debut as film producer. That movie also got nomination for Oscars. After that, he shifted his focus more towards purposeful cinema with the likes of Dil Chahta Hai, Fanna, Tary Zameen Par, Mangal Pandey, Rung De Basanti, 3 Idiots, Dangal & PK. He made his directorial debut in 2007, with another critically acclaimed movie Taray Zameen Par (Stars On The Ground). For this he received Film Fare Awards for Best Director and Best Film of 2007, as well as the National Award for Best Film On Family Welfare. His movie 3 Idiots & pk are the highest grosser of all time for Indian Cinema. In 2012, he hosted a research based television program to highlight social issues at biggest media platforms with the aim to educate people in the name of Satyamev Jayate. He is Mr. Perfectionist Amir Khan.

Don’t chase success, chase excellence. Success will come along the way. Don’t afraid of failure and always have the direction and faith to learn from failures & mistakes. Anyone successful in any field of the world, are successful not because of mere success, but mainly due to their failures. Be consistent and have a courage & patience to do things again and again.

My failures has taught me the most.

The most important thing for today’s leaders or creative persons is of having innate passion. Passion that lead, create interest, and drive you towards your dreams. Be passionate about things you are doing, give your utter focus & attention to it. Always believe in following your dreams. Be specific, limited but be interested & attentive.

I don’t mind compromising to achieve my dream, but I don’t want to compromise the dream itself.

Be The Change You Want To See

If you see something that you want to or wish to change for good, then start this change seeking process from you. Because all the sustainable societal changes only starts from individuals of those factions. Most of us want to do something better for their society, country, faction or group; but they don’t know how to pursue those actions or gestures. For this, first of all find your strengths and your resources, which can be; your knowledge, your skill, your money, your status or your creative work. Then put those resources within your space and within your reach. That is how every little contribution can make big difference.

Try to reach out people’s heart, not with anger but with love and try to transform minds.

Amir Khan On Gandhizm & How to create change in society?

Enjoy What You Are Doing

Don’t be success or destination focused, rather be a traveler and enjoy the ride along. Enjoy your work and do work that excites you. Always try to challenge and surprise yourself, with something new, something better and something different and something cherishing.

Most of the time, life gives us what we are not expecting; it either can be success or failure. But regardless of the consequence or residue of life, always try to live on your own terms. This will help you to avoid regrets. Further, we can’t eliminate uncertainties of life, therefore, only this way we can live our life to the maximum potentials. Don’t compromise on your terms; if any offering sacrifice your own, then don’t do it.

Don’t be so nitpicky and over obssessed with details of things. Always try to follow your heart and live the feel and essence of anything. Go instinctively, if you love something. Going with your heart or mind, is not an absolute truth in this human world. Someone find success from their mind and someone find otherwise. Just always have believe in yourself and on your instinct.

If you are in a privilege position to influence to help and to reach out; then go out for extents to help the under privileged ones. This apparently self less act is not for them, it will actually be for you. This kind, caring and sharing behavior will sooth you and will create calm in you, in addition to spiritual & divine gains. This helpfulness and openness is not only for people below you, but it also works with people at your level. Because, for creative people, there are no boundaries; they bring cultures and people togther.

Mostly, we don’t find ourselves spare for strict work out routine; but one thing that we can do and easily control is to control our diet routine and sleeping habit. This will create huge difference in how you feel and the way you look. Diet plan must be healthy and balanced one, drink lots of water.

We are what we eat.

Believe On Your Instincts

Keep yourself around right kind of people. They may not always be right for you, but keep them around yourself, as far as they are concerned for you and sincere with you. Consult them for every important matter, but always done what you believe in. Always be clear and passionate about your goals, study them well and act selflessly for them. Be sincere and honest with yourself, to reach out for the right instinct and right path for yourself. If your instinct fail you, that failure will be on your instinct not on someone else’s instinct. That wrong will be a learning experience as far as you stay yourself into hard route.

Amir Khan is known for doing not done and un-imaginable things, just due to mere his perseverance, dedication and hard work. He is one of the few method actors of the world, who can change massively their body and their selves for the requirement of the role. 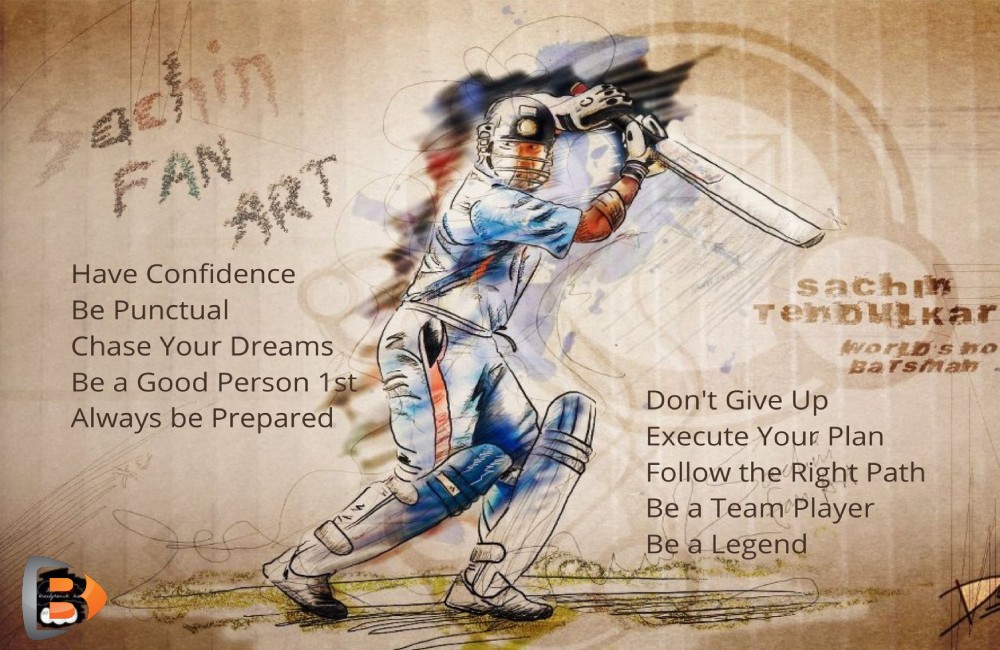 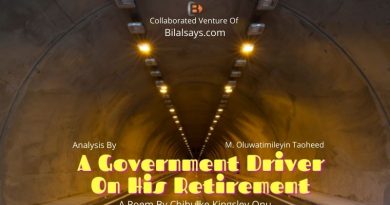 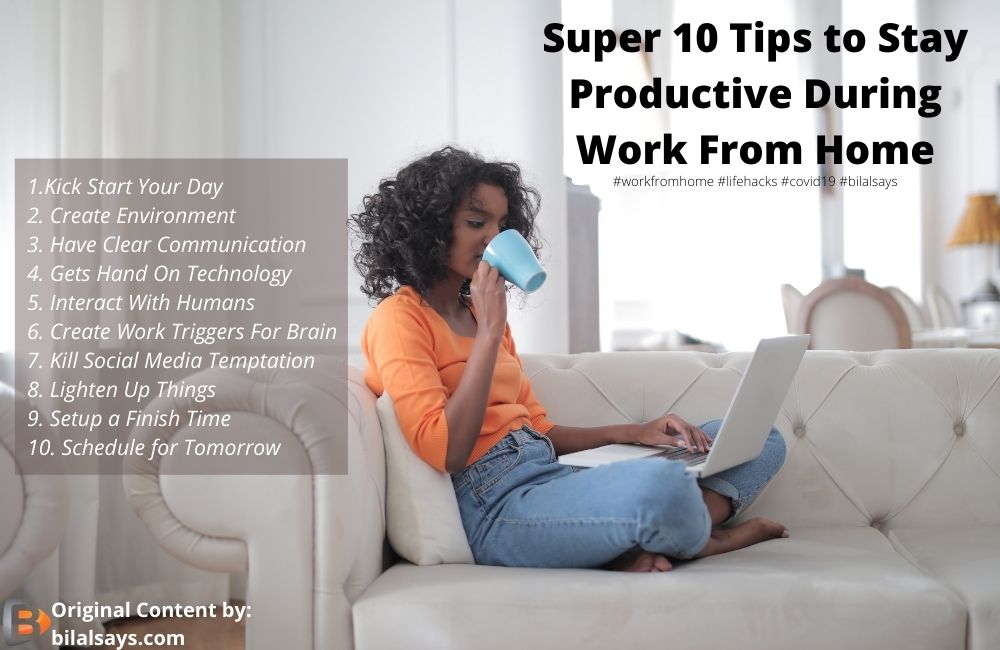 Top 10 Super Tips to Be Productive During Work From Home